Intravenous Skin Lightening involves a safe and natural treatment using antioxidants which naturally occur in our bodies to produce an even lightening result in the skin. The combination of 2 ingredients work powerfully together to simultaneously block the production of pigment formation along with depigmenting the skin. From the second decade of life our endognous production (our body self production) of glutathione decreases by approx 10% per decade.

What is used to lighten the skin?

Glutathione and Vitamin C are given together via intravenous infusion over several sessions to lighten the skin.

Glutathione is a natural occurring tripeptide amino acid well known for its antioxidant capabilities, in fact, it is referred to as “the mother of all antioxidants”. Studies both in vitro and in vivo show evidence of its anti-melanogenic effect. What this means is that Glutathione is made of three essential building blocks known as amino acids and these, when combined in their specific chain of three to form Glutathione, work effectively to prevent the formation of melanin (pigmentation) along with inhibiting the action of the enzyme Tyronaise which is involved in the maturation of melanocytes which darken the skin.

What are the mechanisms of action for Glutathione and Vitamin C

There are several mechanisms of action that Glutathione takes to lighten the skin including:

Vitamin C is co-infused with the IV infusion because of it’s ability to recycle the Glutathione. That is, it keeps Glutathione in its reduced state (called GSH) inside the cells where glutathione does it’s work.

How long is the treatment and how many are required?

Each treatment session will take approximately 30 to 45 minutes in clinic. The treatment involves the Nurse connecting the intravenous to your preferred arm or hand and allowing the infusion to begin. In our suites you will provided with refreshments including tea, coffee and water along with your choice of magazines we have on offer or the TV to ensure your comfort through your visit. At the end of the treatment you will leave the clinic with nothing more than a small plaster. There is a risk of bruising at the injection site, similar to what you would experience when having a blood test.

The number of treatments required are varied between patients and their expected outcomes. Approximately 10 to 12 treatments are a recommended course, depending upon your skin’s response to the infusion. These treatments can be administered up to 2 times per week for accelerated results.

Timing is everything when it comes to achieving the best results. Our most commonly prescribed course of treatments is 10 sessions twice a week over the duration of 5 weeks. At these intervals we are able to maintain high levels of GSH and Vitamin C within the system to continuously prevent and reverse pigmentation formation. 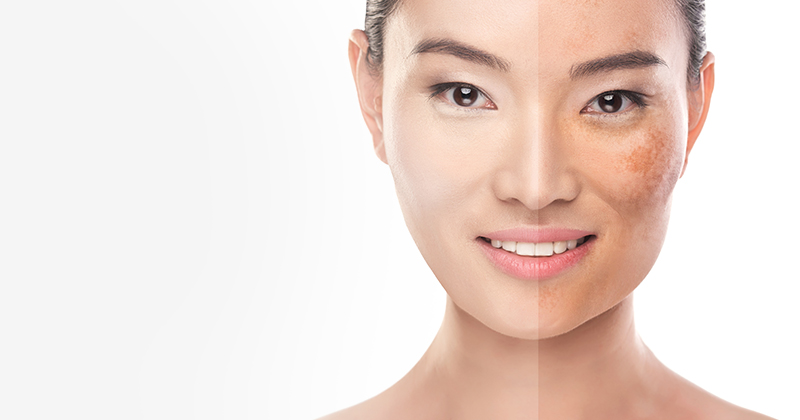 What happens when I complete my course of Infusions?

Once the active ingredients of the infusion have left the body they no longer produce a lightening effect on the skin. As a result exposure to pigment causing factors, namely UV exposure, will see the skin begin to regain pigment and begin to darken again. Steps can be taken to reduce the level of increased pigment. Using a high SPF sunscreen, even on overcast days and during times of incidental exposure such as driving, sitting in a sunny window. Your practitioner can provide further tailored advice on how to maintain results.